Our research focuses on progranulin – a protein linked to frontotemporal dementia (FTD) – and how its deficiency causes neurodegeneration. More than 70 mutations in the GRN (progranulin) gene have been identified in individuals with FTD. The vast majority of these mutations are nonsense or frameshift mutations that introduce premature termination codons and presumably result in degradation of the mutant mRNA through the nonsense-mediated mRNA decay (NMD) pathway. 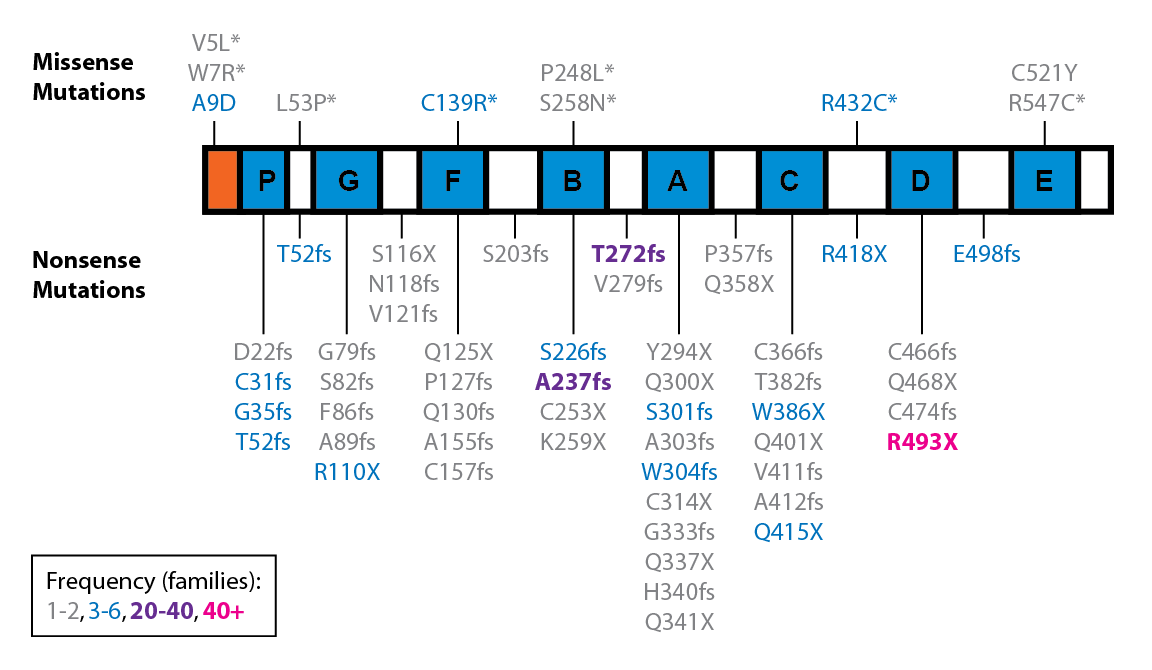 Schematic of progranulin protein indicating positions of FTD-causing GRN mutations. Mutations that are subject to NMD-mediated degradation (i.e., nonsense and certain frameshift mutations) are shown below, and missense mutations are shown above. Orange and blue boxes denote the signal peptide and granulin domains, respectively. The asterisks indicate mutations for which pathogenicity is unclear.

Since progranulin-deficient FTD is a disease of haploinsufficiency, strategies aimed at increasing progranulin levels are feasible therapeutic approaches. One strategy that we are currently testing is using antisense oligonucleotides (ASOs) to block NMD-mediated degradation of the mutant progranulin mRNA. In collaboration with Ionis Pharmaceuticals, we designed and tested a panel of ASOs that target the exon junction complex in exon 12 of the mouse Grn mRNA. By blocking binding of key NMD proteins (including Upf2 and Upf3) to this region, these ASOs would allow the mutant Grn mRNA to evade NMD-mediated degradation. In cultured cells, we found eight of the ASOs increased progranulin mRNA and protein levels in cells containing the Grn-R493X mutation. We are next planning to test these ASOs in vivo using the Grn-R493X knock-in mouse model of FTD. 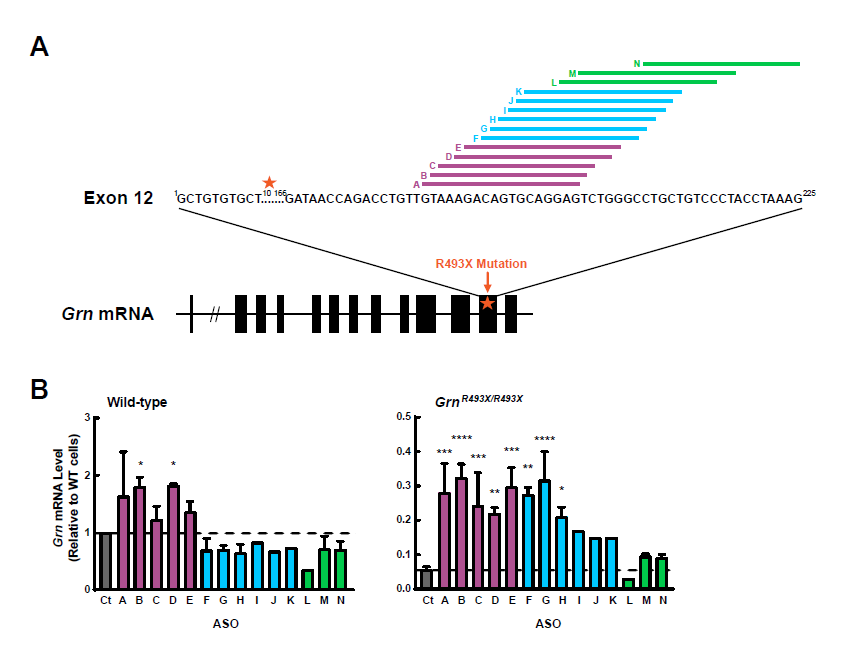 ASOs designed to inhibit NMD of GrnR493X increase Grn mRNA in GrnR493X cells. (A) Schematic of ASO targets in exon 12 of the Grn mRNA. Black boxes, coding exons; star, R493X mutation. (B) MEF cells were transfected with the indicated ASOs, and gene expression was determined by qPCR after 24 h.

We are also investigating progranulin’s structure and function using a variety of molecular and cellular approaches. Progranulin is produced as a pro-protein and can be cleaved by proteases to yield individual granulin units. It is currently unclear whether the full-length progranulin protein or the granulins are the bioactive forms. We are using cell-based assays to address this question and to also test which patient mutations may encode functional proteins. We recently found that the most common patient mutation (R493X) encodes a functional protein. We believe these studies will provide insights into fundamental aspects of progranulin biology and will also help define the scope of mutations that are amenable to specific therapeutic approaches, such as NMD inhibition.